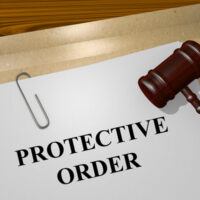 Domestic violence allegations are often raised in divorce proceedings. Keep in mind, abuse need not be proven to actually obtain a divorce. Florida allows a court to grant a “no-fault” divorce based upon irreconcilable differences. So it is not necessary to prove either spouse did anything wrong.

Still, evidence of domestic violence may affect how a Florida court rules on certain disputes issued affecting the underlying dissolution proceedings. And a judge may separately issue a domestic violence injunction against either spouse. This can have lasting repercussions well beyond the divorce case.

A recent decision from the Florida Fourth District Court of Appeals, Bak v. Bak, provides a case in point. In this case, the Court reviewed a domestic violence injunction issued during a divorce that took place 22 years earlier. At the time of the divorce in 1999, the former wife alleged abuse by her then-husband. A judge conducted a hearing and decided the evidence supported a permanent injunction against domestic violence. The court dissolved the marriage shortly thereafter.

Thirteen years later, in 2012, the former husband petitioned the court to dissolve the injunction. The court denied the petition. The former husband tried again two years later, in 2014. Again, the court kept the injunction in place, finding that the former wife still had a “reasonable maintenance of continuing fear of becoming a victim of domestic violence.”

Another five years passed. In 2019, the former husband filed what was now his third petition to dissolve the injunction. Once again, the trial court denied the petition. This time, however, the appellate court sided with the former husband.

The Fourth District noted that one of the grounds previously cited by the trial court for keeping the injunction in effect was that the former husband and former wife’s minor children continued to live with the former wife, and thus there was a prospect they would become exposed to possible domestic violence. But by 2019, the children were no longer living with their mother. More to the point, the former spouses had maintained some contact despite the injunction without incident.

The former husband also testified that the 22-year-old injunction continued to have adverse consequences against him. For example, he was denied work because potential customers learned about the injunction. The injunction had also made it difficult for him to obtain bank loans for his business.

Given the change in circumstances, the fact that there had been no violations of the injunction in over 20 years, and the “lack of a need for the injunction to remain in place,” the Fourth District said the order should now be dissolved.

The legal impact of a divorce case can often last well beyond the final judgment dissolving the marriage. If you need legal advice or representation from an experienced Tampa family attorney, contact the Faulkner Law Group, PLLC, today to schedule a consultation.

By Faulkner Law Group, PLLC | Posted on June 2, 2022
« How The “Good Faith” Exception Protects Even Bad Search Warrants
How Spending During A Divorce Can Affect The “Equitable Distribution” Of Marital Property »