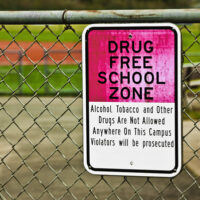 So-called “drug free zone” laws impose additional penalties on persons convicted of possessing or distributing controlled substances within a certain designated area. Typically, drug free zones are designed around schools, daycare facilities, or other buildings were children are normally present. This means that if the police arrest you with drugs near one of these facilities, you could be facing some serious jail time.

But what if a defendant was unaware they were in a drug-free zone? In general, ignorance of the law is not a legal defense. That said, Florida law does require certain facilities to clearly identify themselves before the drug-free zone rule applies.

Take this recent decision from the Florida Fourth District Court of Appeal, Brevil v. State. In this case, an undercover police officer purchased cocaine and heroin from the defendant. The sale took place within 1,000 feet of a preschool–an area considered a drug-free zone under Florida law. There were multiple signs indicating the building was a “PRESCHOOL.”

The defendant did not dispute that he sold drugs to the officer. But he did argue that the drug-free zone enhancement should not apply, because Florida law required the preschool to post signage identifying it as a “licensed child care facility.” Absent such clear and “conspicuous” signage. On that basis, he moved for a judgment of acquittal after the prosecution rested its case. The judge denied the motion and sent the case to the jury, which proceeded to convict the defendant on possession of selling drugs within 1,000 feet of a licensed childcare facility.

On appeal, however, the Fourth District agreed with the defendant that the signage was legally deficient. The appellate court said that a “strict construction” of the statute required that the preschool’s signage “contain language identifying the facility as a licensed child care facility.” No such signage was present on this particular preschool building. The signage identifying it as a “PRESCHOOL” was insufficient, the Fourth District said, as that did not clearly indicate the facility was licensed.

Of course, this does not get the defendant completely off the hook. He still sold drugs to an undercover police officer and was properly convicted of that crime. But the Fourth District held the defendant should not be subject to the additional penalties for conducting the sale in an area that was not properly marked as a drug-free zone. As such, the court returned the case to the trial judge for resentencing on “the lesser sales charges.”

Seemingly small details often matter when it comes to a criminal prosecution. It can mean the difference between conviction and acquittal, or simply in how long a sentence a person faces. That is why it is always in your best interests to work with an experienced Tampa drug crimes lawyer who will zealously represent your interests in court. Contact the Faulkner Law Group, PLLC, today to schedule a consultation with a member of our criminal defense team.

By Faulkner Law Group, PLLC | Posted on October 5, 2021
« Does The Prosecution Have To Disclose Their Witness List To The Defense Before Trial?
Why You Need To Carefully Understand The Conditions Of Criminal Probation »