Close Menu
Tampa Criminal Lawyer > Blog > Drug Crime > Can The Police Order You Out Of Your Car During A Traffic Stop?

Can The Police Order You Out Of Your Car During A Traffic Stop? 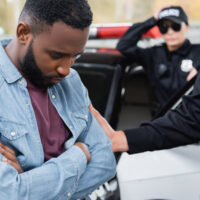 It is not uncommon for a traffic stop to turn into an investigation of some other potential crime, such as drunk driving or drug possession. But the police cannot prolong a traffic stop based on mere suspicion of other criminal activity. Indeed, the United States Supreme Court has made it clear that a police stop “exceeding the time needed to handle the matter for which the stop was made violates the Constitution’s shield against unreasonable seizures.”

Florida’s appeals courts are split on the question of whether demanding a driver exit their vehicle during a traffic stop violates the Supreme Court’s rule. The Florida Second District Court of Appeal held in a recent decision, Creller v. State, that such a demand was illegal. In doing so, the Second District said it was in conflict with the Fifth District Court of Appeal on this subject.

The Creller case originated here in Tampa. An undercover plainclothes officer observed a driver–the defendant in this case–cutting through a parking lot in order to avoid a red light at an intersection. This was a traffic violation under Florida law, so the officer radioed for a uniformed officer to conduct a traffic stop.

To make a long story short, the officers pulled the defendant out of his vehicle and proceeded to search him. The officers found illegal drugs on the defendant. He never received a traffic citation but he was charged with possession of a controlled substance and resisting an officer without violence. A jury convicted him on both charges.

On appeal, the Second District threw out the conviction. It held the arrest and search were illegal since the police had no valid grounds for demanding the defendant exit his vehicle. More to the point, there was no need for the defendant to get out of his car in order to “safely complete the traffic stop,” which was why the police detained the defendant in the first place.

The Second District noted a command to exit a vehicle is only justified during a traffic stop “when such removal is justified by officer safety concerns.” There was no evidence of such concerns here, the Court said. In reaching this conclusion, the Second District said it was in conflict with the Fifth District Court of Appeal, which held in a 2017 case that once an officer initiates a lawful traffic stop, they can order the driver to exit the vehicle “even without a particularized basis to believe the driver was a threat to the officer’s safety.”

Drug cases often turn on the legality of the means by which the police obtained critical evidence. That is why it is crucial to work with an experienced Tampa drug crimes lawyer who can help you identify any potential problems with the police’s conduct in your case. Contact the Faulkner Law Group, PLLC, today to schedule a free consultation with a member of our criminal defense team.