Close Menu
Tampa Family Lawyer > Blog > Theft > What Is The Difference Between Felony And Misdemeanor Trespassing In Florida?

What Is The Difference Between Felony And Misdemeanor Trespassing In Florida? 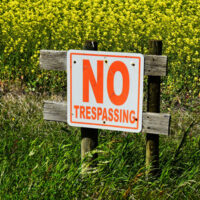 We have all seen “NO TRESPASSING” signs. So what happens if you ignore the sign and trespass? Have you actually committed a crime?

Under Florida law, the answer is yes. Section 810.09 of the Florida Statutes defines “trespass on property other than a structure or conveyance” as a first-degree misdemeanor. The statute also contains a number of potential enhancements. For example, if the trespass occurs on a clearly marked construction site, prosecutors can charge the trespasser with a third-degree felony. Similarly, trespass on any “commercial horticulture property,” such as a farm or orchard, can also face a felony charge.

Anytime that a criminal statute contains such “enhancements,” it is still the state’s burden to prove the special condition applies. In other words, if you are charged with trespass on commercial horticulture property, the prosecution needs to prove that was the case. The statute further requires that the enhancement only applies if there was signage on the property that states, “THIS AREA IS DESIGNATED COMMERCIAL PROPERTY FOR HORTICULTURE PRODUCTS, AND ANYONE WHO TRESPASSES ON THIS PROPERTY COMMITS A FELONY.”

This might seem like a technicality. But in fact, the Florida Third District Court of Appeal recently reversed a felony trespassing conviction due to insufficient evidence of required signage. The facts of this case are fairly simple. The defendant was found on someone else’s property breaking branches off of lychee trees. The defendant took some of the fruits, placed them in his truck, and drove away. A short time later, the police stopped and arrested the defendant, charging him with petit theft and felony trespassing on commercial horticultural property.

At trial, the defense argued the victim had not posted adequate signage placing the defendant on notice this was commercial horticultural property subject to the felony trespass rule. As such, the defense asked the trial judge to let the jury consider the lesser offense of misdemeanor trespass. The judge refused and the jury proceeded to convict the defendant of the felony charge.

On appeal, however, the Third District agreed with the defendant that the evidence produced at trial did not support the felony charge. The only evidence admitted was a single photograph of a sign that contained the warning described above. But as the appellate court noted, the jury never heard evidence regarding the size, location, or number of signs posted. Nor was there any proof that any signs contained the name of the owner or occupant of the land, which is also required by the statute. As such, there was insufficient evidence that the required signage was “legally posted.” The Third District therefore reversed the defendant’s felony trespassing conviction.

The difference between a misdemeanor and felony charge is often smaller than you might image. That is why it is important to work with a Tampa theft offenses lawyer who understands the law and can provide you with expert advice and representation. Contact the Faulkner Law Group, PLLC, today if you need to speak with a criminal defense attorney right away.

By Faulkner Law Group, PLLC | Posted on October 27, 2021
« When Can A Judge Modify A Parent’s Child Visitation Schedule?
What Is The Difference Between A Bench And Jury Trial In A Florida Criminal Case? »