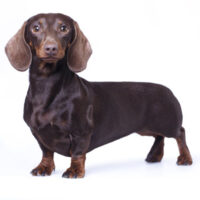 This is hard to write about as a lover of the dachshund breed. Nonetheless, it is a crime. A 17-year-old boy is accused of accosting an elderly man who was walking his two dogs. In the attempted robbery, the boy fired several shots striking both of the dogs. The man grabbed his dogs and ran, but the boy continued to fire at him.

Investigators arrived to find one of the dogs severely injured. He was taken to the veterinarian where he succumbed to his injuries.

The teen is suspected in connection with a number of armed robberies in the area. He was out on bond when this last robbery occurred. In this incident, he is facing two counts of aggravated cruelty to animals, aggravated assault, armed robbery, and aggravated battery with great bodily harm. Prior to his arrest on these charges, he was wanted for aggravated assault and robbery with a firearm. Police also suspect him in other burglaries. Below, we’ll take a look at how the investigation will unfold.

What will happen next for this teen?

The victim has identified the teen as the attacker. At 17 years of age, he is still a minor, but the boy is on auto-destruct and will continue to harm people until he is stopped. There is debate over whether or not treatment can be effective for individuals who evince this sort of behavior as youths. His conduct is vaguely feral. He hunts the streets looking for easy prey and then robs them under the threat of death. As far as strategies for survival go, it’s a bad one, but it’s something we see in economically depressed urban areas all too frequently.

Chances are good that this particular teen has left more witnesses than the two who are pursuing charges against him. That means that police will be asking the community for information regarding the teen and anyone who comes forward will have their experience heard by the prosecutors. While he is facing two separate cases related to two separate robberies, it is likely that the charges will get compounded once more victims come forward.

As it stands, armed robbery is a first-degree felony and he is facing two charges on that crime. A first-degree felony has a maximum sentence of 30 years. So, on the two most serious charges, he could face a maximum of 60 years. In Florida, the courts leave little room for judges to deviate from the prevailing sentencing guidelines. Florida has a mandatory minimum sentence of 10 years for armed robbery, so at the very least, this teen will face a 20-year sentence if convicted on both counts. His age may work in his favor, however.

Faulkner Law Group represents the rights of those who have been charged with crimes in Tampa. Call our Tampa criminal defense lawyers today to schedule an appointment and we can begin preparing your defense immediately.

By Faulkner Law Group, PLLC | Posted on January 24, 2023
« Is It Legal To Skateboard In Tampa?
Criminal Mischief Spree Ends In Murder Charge »