Close Menu
Tampa Criminal Lawyer > Blog > Criminal > Have You Been Charged With Extortion?

Have You Been Charged With Extortion? 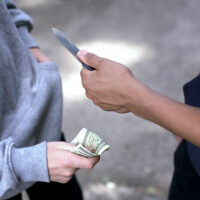 Extortion is something that you see a lot in movies, but it is very different to living the plot. If you have been charged with committing extortion in Florida, you are facing a potential 15-year-long prison sentence. Extortion is taken very seriously in Florida, so it’s important to make sure that you have experienced and dedicated legal counsel on your side to ensure that your rights are protected and that you receive a fair trial. Luckily, just because you have been charged with extortion does not mean that you will be convicted. Having an attorney to help you fight the charges by launching the best possible defense can help you secure a not-guilty verdict and keep you out of prison.

Under Florida law, extortion occurs when someone threatens another individual with physical or reputational harm in order to compel them to provide money, power, something of value, or to act against their will. In order to be convicted of having committed extortion, the prosecution must be able to show that the defendant did this with actual malice. This is a higher standard than legal malice. In order to be convicted of any crime, the prosecution must demonstrate that the defendant had the intention to commit the illegal act. This is known as legal malice. For instance, if someone had an involuntary muscle spasm causing their hand to hit another person’s arm, they would not have committed battery because they lacked the intention to hit that person’s arm. In other words, they lacked legal malice. In order to show legal malice, the prosecution must show that the defendant not only acted intentionally, but maliciously, with ill will, hatred, spite, or evil intent.

Given that extortion carries a potential prison sentence of up to 15 years, it’s important to have a strong defense. Luckily, there are a number of them available. Defenses to extortion work to keep the prosecution from establishing each of the necessary elements of the crime. The best defense in your particular case will depend on what is being alleged. For instance, if you did not commit the crime alleged at all and it is a case of mistaken identity, actual innocence is a defense. If you did not make a threat, or merely made an idle threat, this would not constitute extortion and would serve as a defense. Another strong defense is that you lacked the necessary intent to commit the crime, or that you acted with no malice or intent to be malicious. The best way to determine the strongest defense in your case is to consult with an attorney who can assess all of the facts and circumstances in order to determine the best legal strategy to avoid a conviction.

Schedule a Consultation with the Faulkner Law Group

If you are facing extortion charges in Florida, you need an experienced Tampa criminal defense attorney on your side. Contact the Faulkner Law Group today to schedule a consultation and find out how we can work toward getting you the best possible outcome in your case.

By Faulkner Law Group, PLLC | Posted on October 14, 2022
« Have You Been Charged With Xanax Possession In Tampa?
A Comprehensive Guide To Identity Theft Charges In Florida »