When Does A Mistrial Lead To A “Double Jeopardy” Situation? 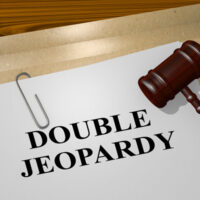 The phrase double jeopardy refers to the constitutional prohibition on trying a person twice for the same crime. Basically, if you are found not guilty by a jury, the state cannot re-try you on the same charge hoping to get a different verdict. However, if a trial ends without a jury verdict–i.e., there is a mistrial–double jeopardy does not necessarily attach. For example, if the mistrial occurred because the jury was deadlocked, the prosecution is free to seek a retrial. But if you ask for a mistrial and the judge grants it, then double jeopardy usually will not attach.

If the prosecution asks for a mistrial, or the court declares one on its own initiative, and you did not consent, then double jeopardy will attach unless there was a “manifest necessity” to declare the mistrial.

A recent decision from the Florida Third District Court of APpeal, State v. Jones, provides a good illustration of a situation where a judge declared a mistrial without manifest necessity, thus preventing the prosecution from retrying a defendant. This case involved a defendant accused of armed burglary and aggravated battery.

A jury was selected and sworn-in to hear the case. The day after jury selection, however, the prosecution informed the trial judge that it failed to promptly disclose some potentially relevant evidence to the defense. The defense objected, prompting the judge to conduct a hearing to determine if the state violated pretrial discovery rules.

The defense suggested the court order a continuance to give it time to review this late-disclosed evidence. Acting on her own initiative, the judge then decided to discharge the jury and declare a mistrial. Neither side asked for one. And before the retrial was scheduled to begin, the defense moved to dismiss the case, arguing that double jeopardy had attached.

The Third District agreed with the defendant and granted the dismissal. The appellate court noted that under normal circumstances, “Jeopardy attaches in a criminal proceeding when the jury is impaneled and sworn.” That is, once a jury is picked, the defendant normally has a constitutional right to have their guilt or innocence determined by that specific jury.

Since the defendant never requested or consented to a mistrial here, the only reason jeopardy could not attach would be “manifest necessity.” The Third District said that was not the situation here. Manifest necessity basically means the trial court had no alternative but to declare a mistrial. To the contrary, the Third District said there was no justification for declaring a mistrial in the first place. The judge simply could have delayed the trial a few days to give the defense an opportunity to review the new evidence–as the defense had requested. Absent manifest necessity, the judge’s actions precluded the state from retrying the defendant.

While this was an unusual situation, it does illustrate how seriously Florida courts take the double jeopardy rule. Indeed, it is one of our most important constitutional protections. And if you are on trial and need representation from a qualified Tampa criminal defense lawyer, contact the Faulkner Law Group, PLLC, today to schedule a consultation.

By Faulkner Law Group, PLLC | Posted on August 18, 2021
« Can The State Subpoena My Medical Records Following A Car Accident?
Does A Judge Have To Provide “Specific Steps” For You To Regain Time With Your Child? »