Close Menu
Tampa Family Lawyer > Blog > Criminal > How Does The “Excited Utterance” To The Hearsay Rule Work In A Florida Criminal Trial?

How Does The “Excited Utterance” To The Hearsay Rule Work In A Florida Criminal Trial? 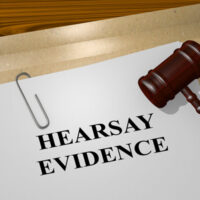 There are strict rules governing the admission of evidence in a Florida criminal trial. One of the most important rules is the general prohibition against hearsay. The word hearsay refers to out-of-court statements offered to prove the truth of the matter asserted.

There are exceptions to the hearsay rule. One of the most commonly used is the “excited utterance” exception. According to the Florida Supreme Court, this exception applies when the out-of-court statement in question meets the following criteria:

In other words, an excited statement made in the moment can be admitted as evidence even if it would otherwise qualify as hearsay. But a statement made after-the-fact, even in response to a traumatic event, would not qualify for the exception.

The Florida First District Court of Appeal recently reversed a sex crimes conviction that was based on what that Court determined was an improper application of the excited utterance exception. In Schluck v. State, prosecutors alleged the defendant sexually assaulted a college student in her dorm room. Surveillance video of the dorm showed the defendant leaving the dorm at 7:14 the morning after the alleged assault. Thirty minutes after that, at 7:44 a.m., the accuser contacted the campus police.

At trial, the prosecution introduced the recording of the accuser’s call, in which she said, “I think that I was … raped last night.” The defense objected to the recording as hearsay. The trial judge allowed it, however, under the excited utterance exception. The jury ultimately convicted the defendant of burglary of an occupied dwelling with battery and sexual battery.

On appeal, the First District agreed with the defendant that the excited utterance exception did not apply to these facts. The Court noted the accuser’s statement was not made immediately after the alleged sexual assault. It came several hours later and after the accuser had time to discuss the matter with another person (her roommate). This meant the accuser had time to “engage in a reflective thought process.” While the Court observed this did not mean the accuser was lying, it did mean her recorded statement to the campus police was not an “excited utterance” for purposes of the hearsay exception.

More to the point, the admission of the accuser’s statements at trial was not a “harmless error.” The First District noted this recording “was the only direct evidence of the victim’s lack of consent” to sexual activity and “the only evidence” where the jury heard from the accuser. As such, the defendant was entitled to a new trial.

A sex crimes conviction carries serious and life-altering consequences. It is therefore essential to ensure that prosecutors and judges follow the law in seeking to hold someone responsible for an alleged sex crime. If you have been charged with such an offense and need skilled representation from a Tampa criminal defense lawyer, contact the Faulkner Law Group, PLLC, today.

By Faulkner Law Group, PLLC | Posted on March 1, 2022
« Can A Judge Use My Claim Of Innocence Against Me At Sentencing?
Will An Appeals Court Re-Weigh The Evidence Against Me? »