What Is Considered “Cyberstalking” In Florida? 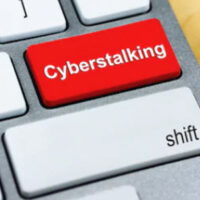 Most of us have seen–or dealt with–abusive behavior online at one time or another. In some cases such behavior may rise to the level of cyberstalking. This is not simply a term of art. Florida law specifically recognizes cyberstalking as a criminal offense. And individuals who have been targeted by such behavior may seek an order of protection against their alleged cyberstalker.

The specific legal definition of cyberstalking in Florida is to,

engage in a course of conduct to communicate, or to cause to be communicated, words, images, or language by or through the use of electronic mail or electronic communication, directed at a specific person … causing substantial emotional distress to that person and serving no legitimate purpose.

This is fairly broad language and it may be used to justify a cyberstalking injunction even when the respondent may not necessarily have intended to harass or threaten. Note the statute only requires proof that the respondent communicated or “caused to be communicated” messages that caused “substantial emotional distress” to the petitioner. On that basis alone, a court may issue an injunction subjecting the respondent to potentially serious criminal penalties.

A recent decision from the Florida Second District Court of Appeal, Stober v. Harris, illustrates just how much latitude courts have in issuing these cyberstalking injunctions. In this case a trial court actually refused to issue such an injunction, but the appellate court ordered the judge to reconsider that decision.

Things escalated quickly. Both sides started publishing videos on their respective channels criticizing one another. As relevant here, the petitioner said she started receiving death threats and other disturbing messages, such as manufactured images of her hanging from a tree. Some of the messages purported to come from the respondent, although they did not originate at his email address.

The Second District disagreed on both counts. With respect to jurisdiction, the appellate court said Florida’s long-arm jurisdiction applied to cases, such as this one, where the respondent allegedly posted defamatory statements on the Internet about a Florida resident, as such statements were inevitably accessed by other Florida residents.

On the second point, the Second District said that if the respondent did in fact use his YouTube channel to direct his viewers to harass the petitioner, that could meet the statutory definition of cyberstalking in Florida. The appellate court therefore directed the trial judge to reconsider their earlier conclusion on this issue.

Anytime you are subject to an injunction or order of protection, you need to be aware of the potential criminal consequences, even for an inadvertent violation. An experienced Tampa criminal defense lawyer can help. Contact the Faulkner Law Group, PLLC, today to schedule a consultation.

By Faulkner Law Group, PLLC | Posted on April 12, 2022
« What Happens If I Sell Firearms Without A License?
Can The State Object To The Appointment Of Post-Conviction Counsel? »